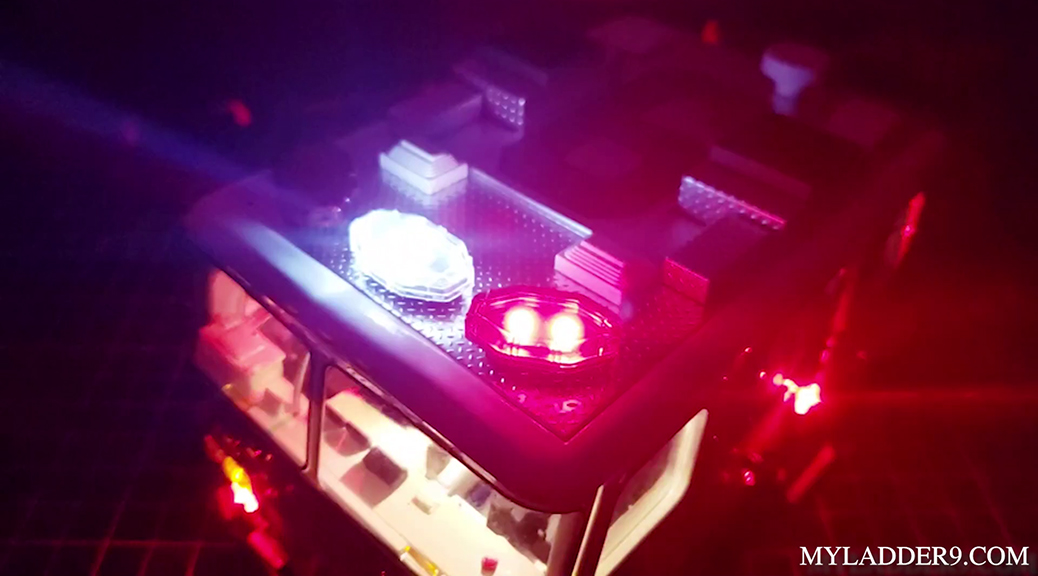 This page is part of my Custom Lighting Mod series of articles.

DISCLAIMER: If you choose to attempt any of these modifications, you assume all risks thereof. I just wanted to share my experiences here. Neither Agora Models, nor myself, are responsible for any damages that may occur.

After reinstalling the two Front Light Clusters with our modified Headlights, I went to work on intercepting the cabling of the three roof Lightbars so I could power them with my LMB components and not the stock PCB.

I knew the black wire of the three-pin Lightbar cables was ground, so I could infer that the red and yellow wires were the positive (+) sides of each of the two LEDs in each Lightbar. Using some 3-pin JST PH pre-wired plugs I found at Digi-Key, I tracked all of the Lightbar LEDs down and marked the wires with tape (CL = Center Left, LR = Left Right, etc.): 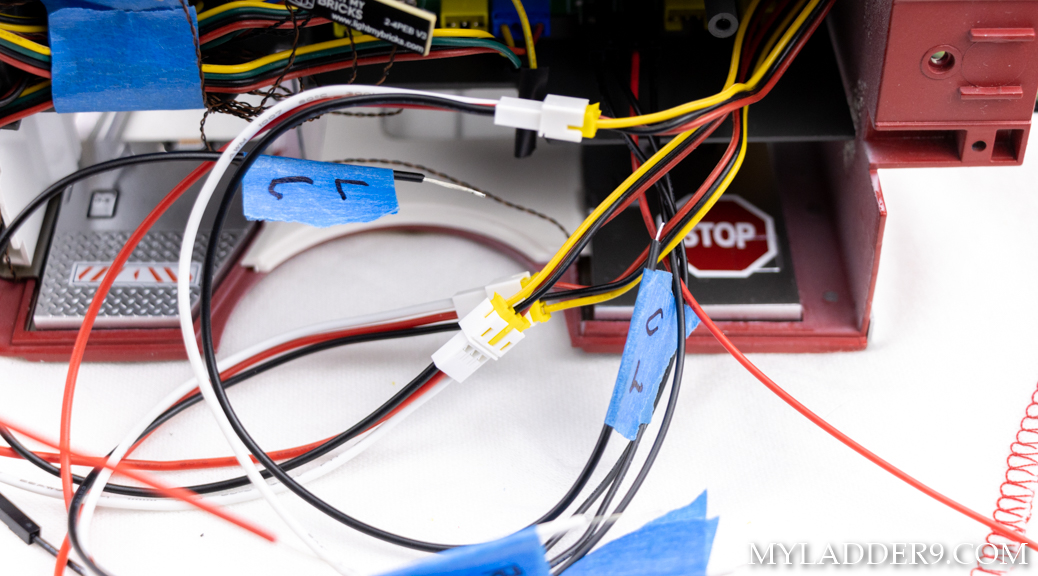 Then, I started soldering LMB wires to the plugs. Again, because of the shared ground circuit, I had to wire the two outside red Lightbars to one LMB cable and the center clear Lightbar to another cable: 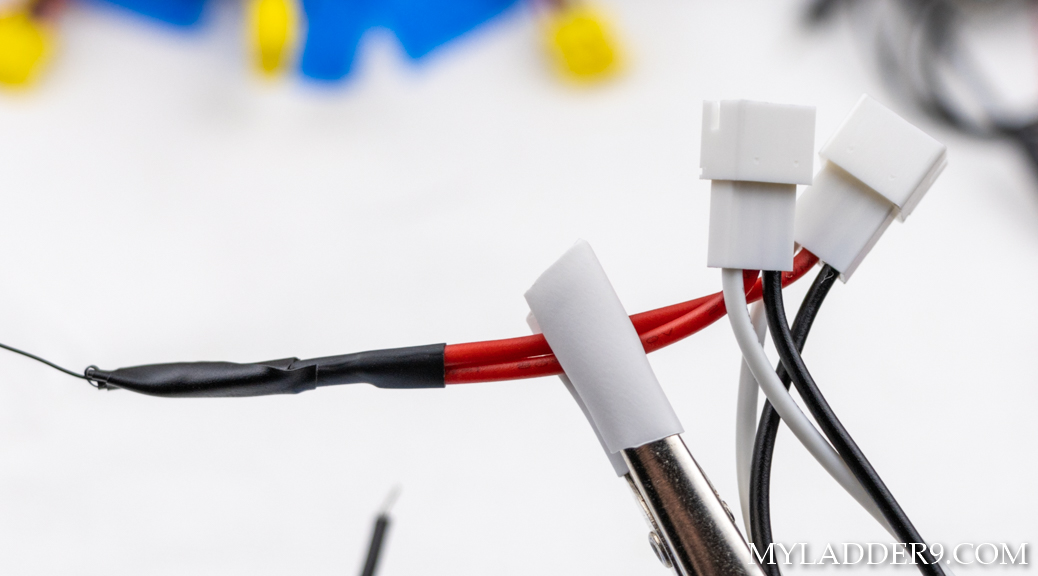 After connecting these plugs to a LMB Effects Board, I was fairly happy with how they turned out. However, for some reason, the stock LEDs inside these Lightbars are just not that bright and are quite hard to see any of the light from the sides. This appears to be because the Lightbars are lit from below with tiny red SMD LEDs that shine up through fake ‘LED domes’. Therefore, I decided to tear them apart and see if I could make them better.

The first thing I had to do was take the entire cab apart, remove the Inner Roof, and push the three Lightbars out. The red and clear lenses on the Lightbars are glued onto to the black bases, but after a few minutes of messing with them, I was able to pop off the red lenses. Unfortunately, the clear lens did not want to come off at all, so I will use it as an example of how to complete this modification if you can’t remove the lenses from your own Lightbars.

If the Lightbar lenses are able to be removed:

Gently push up on the tiny PCB inside the Lightbar and it should lift the ‘chrome’ sticker off the base and pop out a small rectangular center panel that has the two fake LED domes in it. On the back of this panel, there is a small plastic pin that was melted to hold the PCB in place. Using my sprue cutters, I carefully snipped off the melted end of this pin and separated the PCB from the panel. Set this cable aside for now.

NOTE: If the two clear ‘fake’ LED domes do not fall out of this panel, gently pop them out by hand so we have these parts to work with: 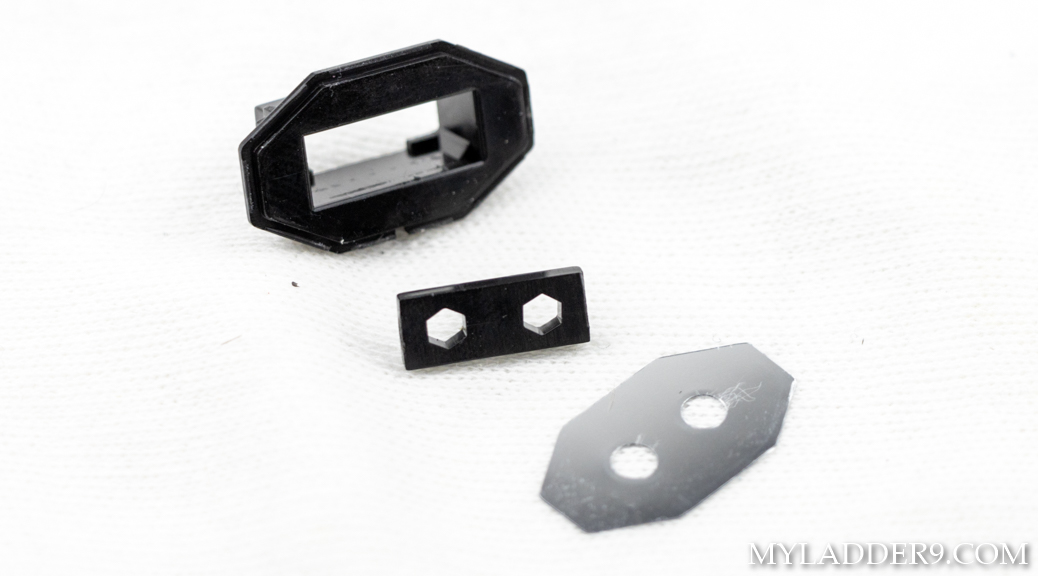 To fit real 3mm round LEDs into this rectangular panel, I had to widen the two holes. Using a 3mm bit in my Pin Vise Drill, this was very easy: 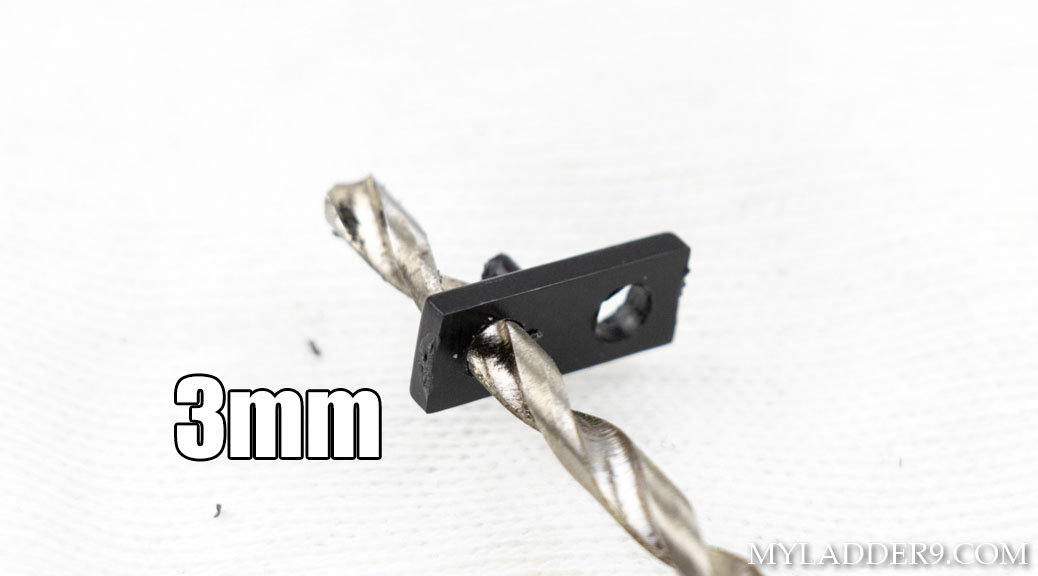 While this step is optional, I snipped off the pin on the back of these panels – I wanted to give myself a little more room for the LED leads: 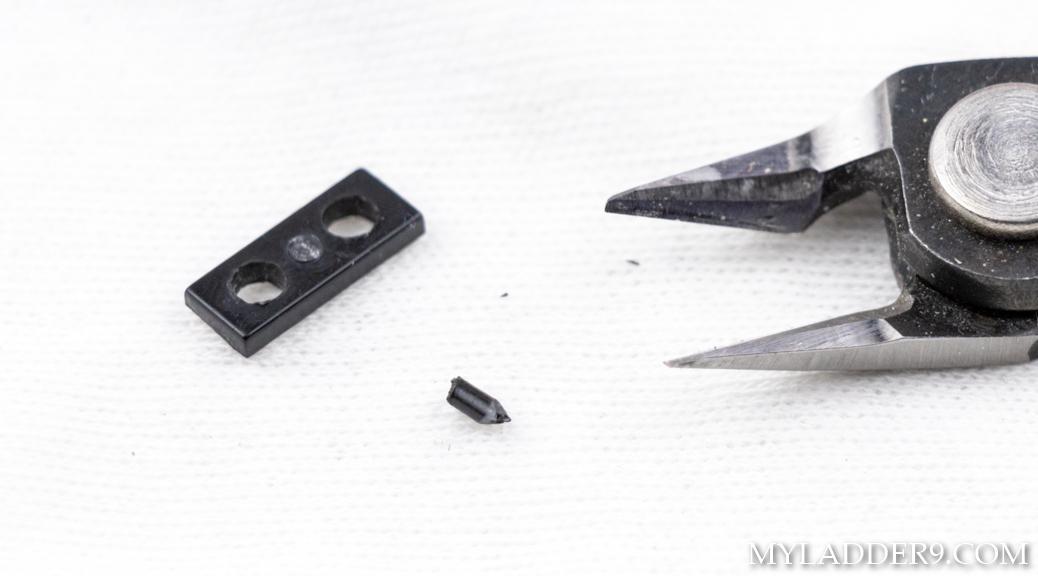 I fully seated and glued two 3mm round red diffused LEDs into the holes of this panel, aligning the longer anode (+) leads of the LEDs towards the center of the panel. These two pins were then soldered together close to the panel, as shown: 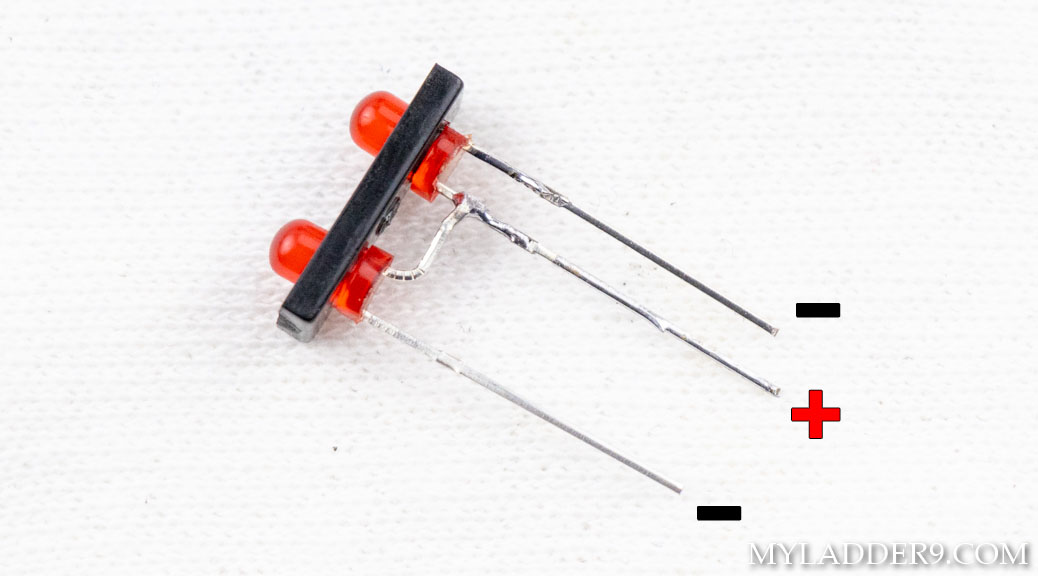 I took a moment here to test fit the panel and base back together: 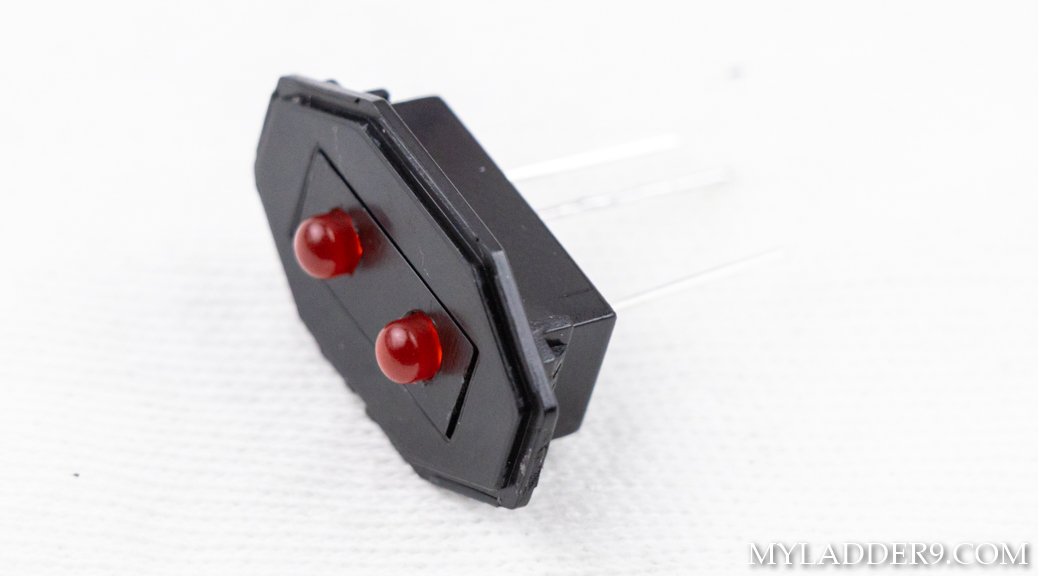 From the underside of the Lightbar, you can see why I wanted to solder the positive leads together near the panel. I only wanted the three straight leads poking out the bottom. These leads will all need to be bent at an angle once installed into the roof: 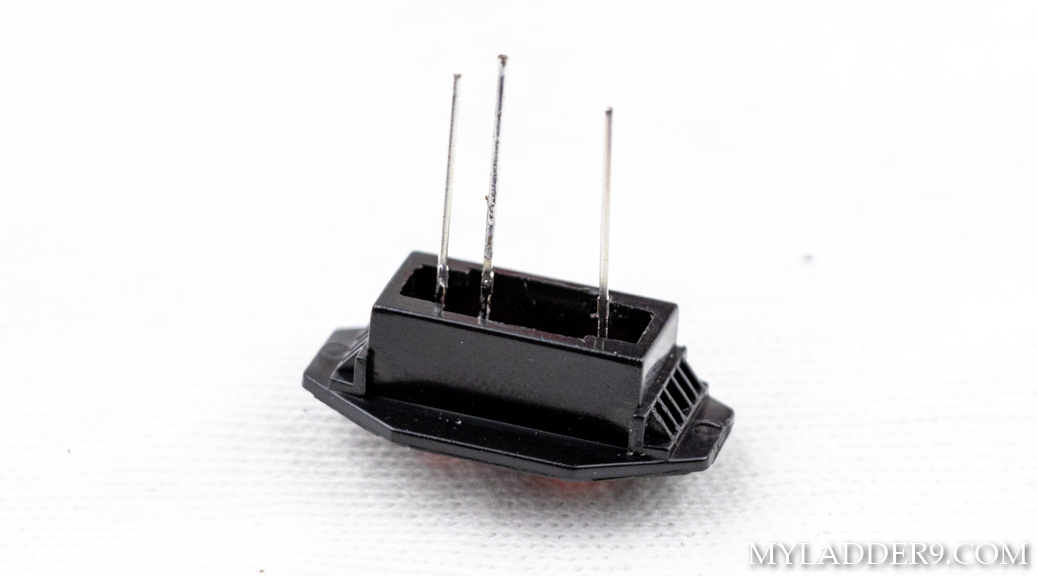 Next, I cut off the old PCB from the Lightbar cable (we no longer need this PCB): 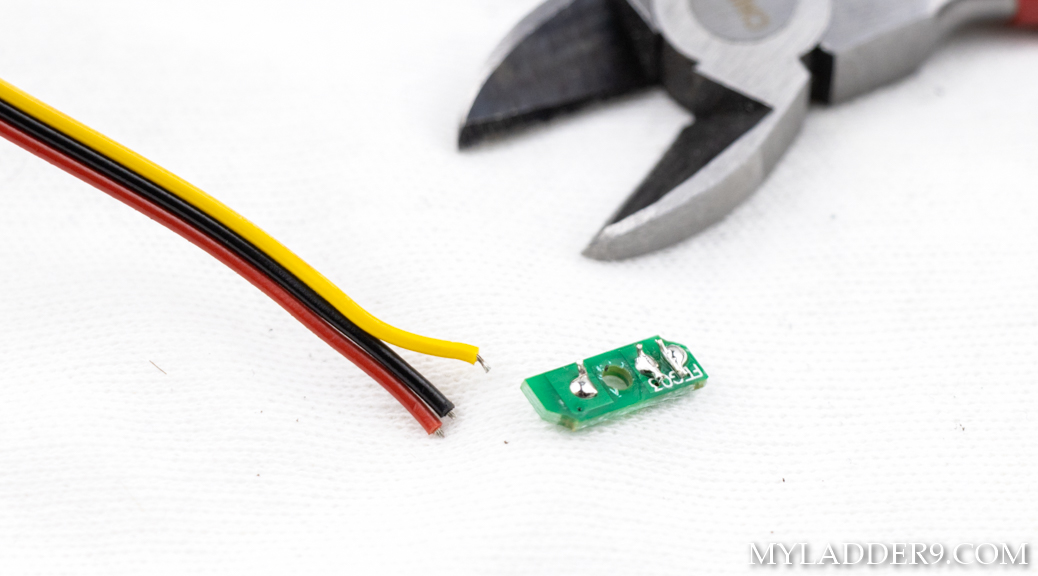 Using my Helping Hands stand, I stripped the ends of the Lightbar cable and soldered them to the leads of the LEDs as shown. I used some small bits of heat-shrink tubing to isolate the leads from each other: 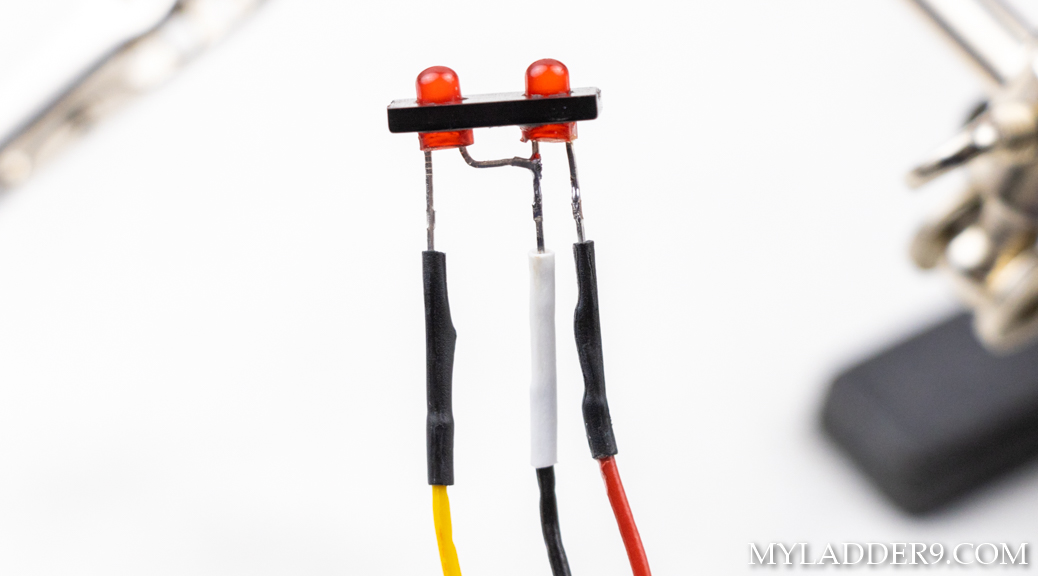 I reassembled the Lightbar and found these new LEDs stick up a bit too high and would hit the lens, which I expected. I simply needed to sand the tops of the LEDs down flat enough that the lens would sit right on top of the LEDs. Make sure not to sand off so much that you hit the little diode inside your LED: 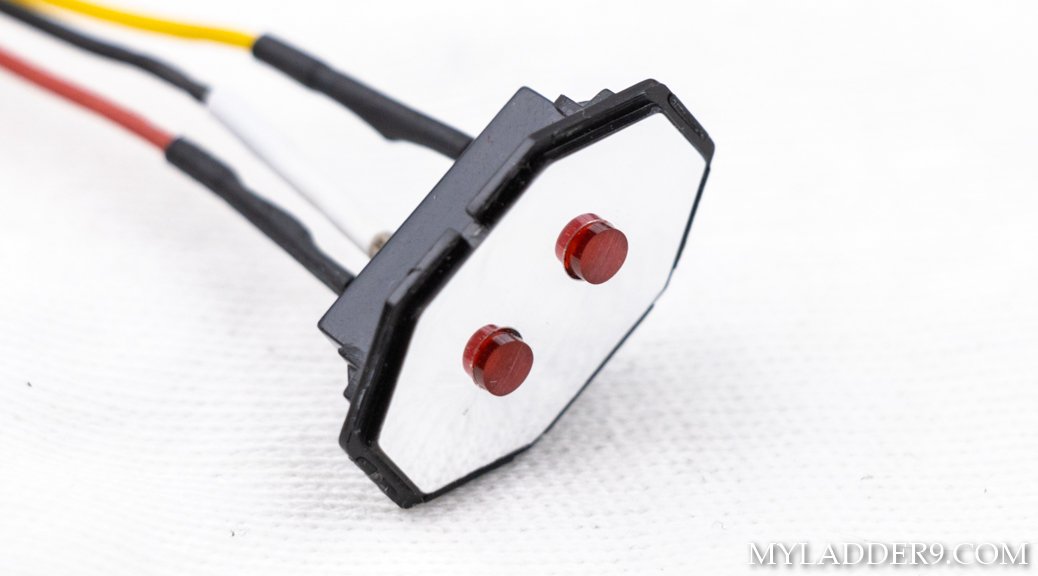 To reattach the lens to the Lightbar, I used a couple of tiny drops of super glue at the ends. I just want to hold it in place, but not so much that I can’t remove the lens later on if needed: 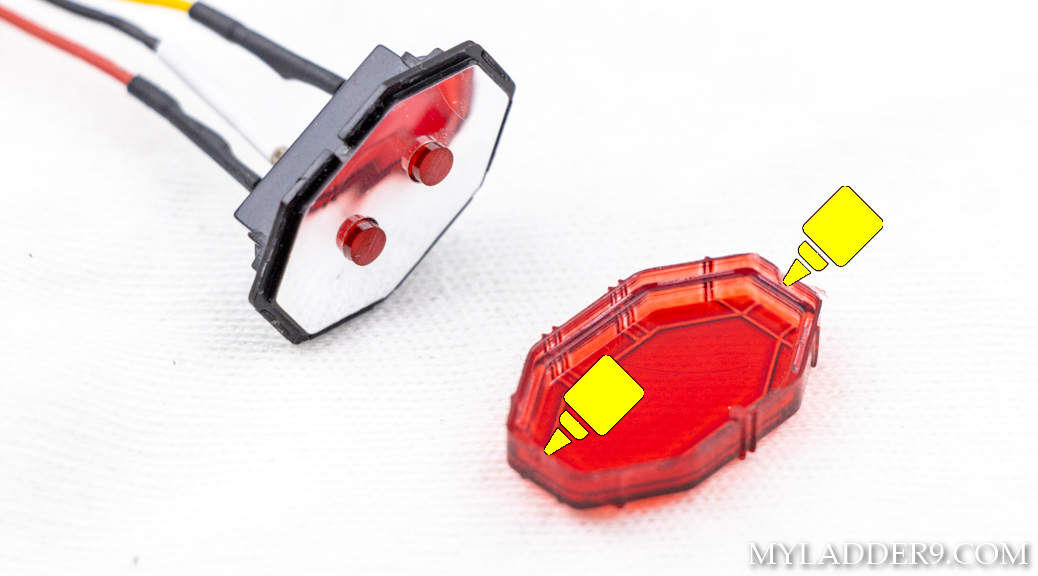 This Lightbar is now ready to be re-installed into the model: 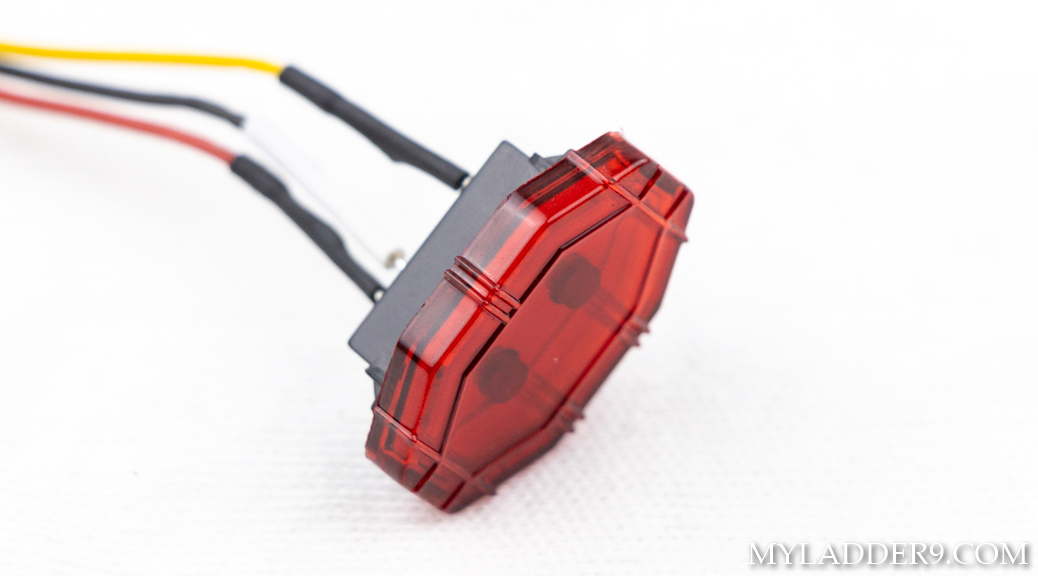 If the Lightbar lenses are NOT able to be removed:

As much as I tried, I could not remove the clear lens from my center Lightbar. Therefore, after removing the PCB and fake dome LEDs in the same way as above, I had to carefully drill out the 3mm holes from the inside. We do not want to drill through too far and into the lens.

TIP: I managed to get some plastic bits stuck inside the lens after drilling this. I ended up using my airbrush at high pressure (with no paint) to blow air into one LED hole. This blew the plastic bits out the other hole: 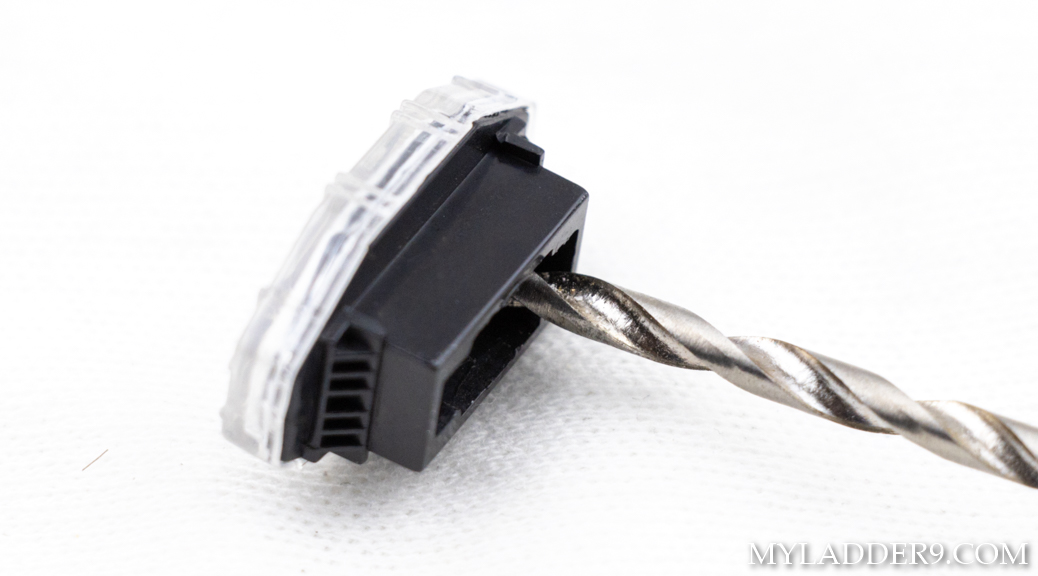 Sanding, gluing, and soldering the LEDs inside this Lightbar was a bit more fiddly then the previous ones, but it worked out just the same. I used diffused white LEDs for this center Lightbar to simulate the Opticom-type traffic-signal changing lights found on many fire trucks: 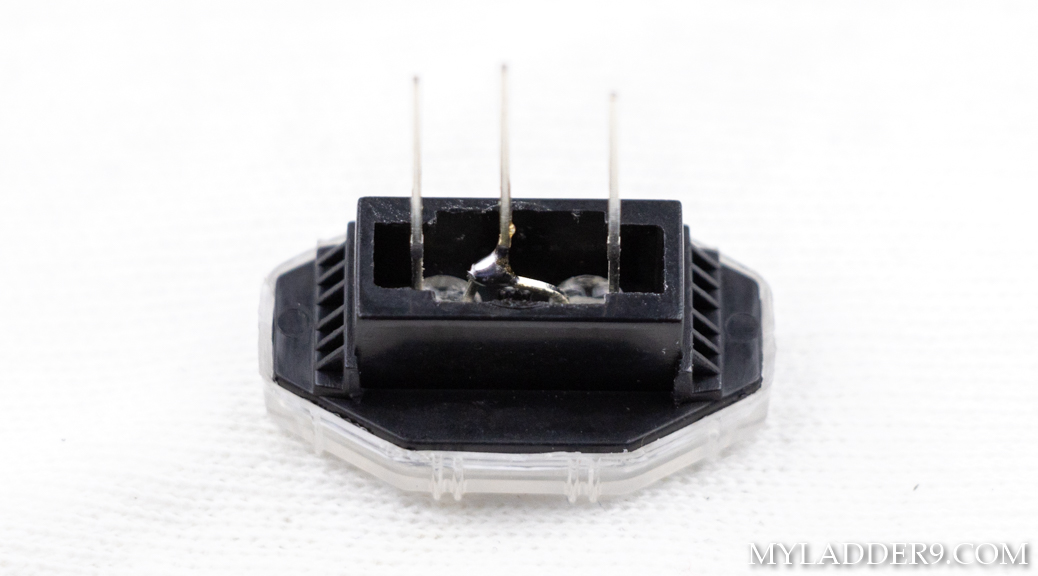 The final result with a ‘sealed’ Lightbar is nearly as good as when we can take them apart. However, I did manage to just barely nick the lens with my drill bit. To be honest, I barely notice it: 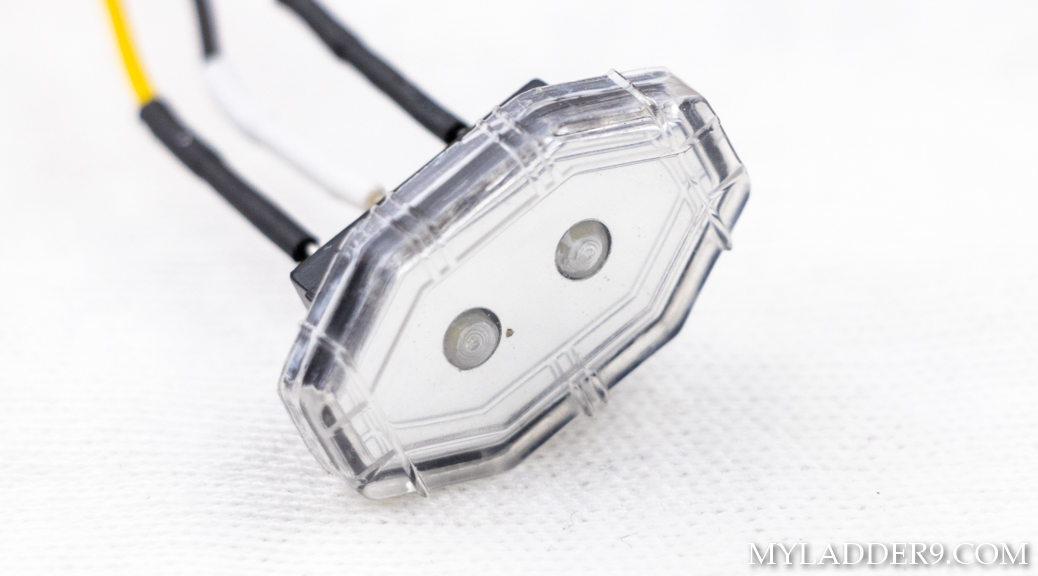 To get my Lightbars to have the lighting effect I wanted, I put together this wiring diagram. You can see the new LEDs inside each Lightbar on the left using the Stock Cables. I left the Stock Cables mostly unmodified so they would fit inside the roof and reach to the back of the cab and down without any problems. Attached to the plugs of those cables are my 3-pin JST PH pre-wired plugs. On the far right are two LMB LED Cables which I cut the LED off of. 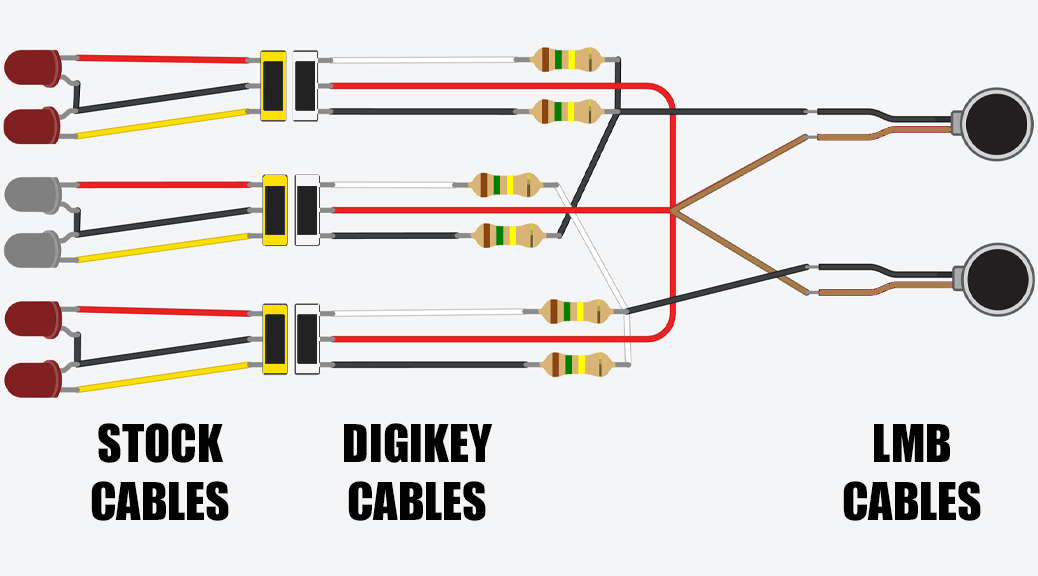 I started by taking two of the 3-pin JST PH pre-wired plugs and soldered a 150Ω ¼ watt resistor to each of the ‘outside’ white and black wires. Then, I soldered the center red wires together. These will be used for the red Lightbars:

Since the white LEDs I installed in the center Lightbar have a higher Forward Voltage (3.0 – 3.2V) than the red LEDs, they would normally use a resistor with less resistance. However, I used the same 150Ω ¼ watt resistors on these white LEDs as well using a third Digikey pre-wired plug. This is because at full power, my white LEDs would put out more light than the reds and I wanted to keep the red and clear light levels close to each other.

Finally, I got to soldering all of these wires together: 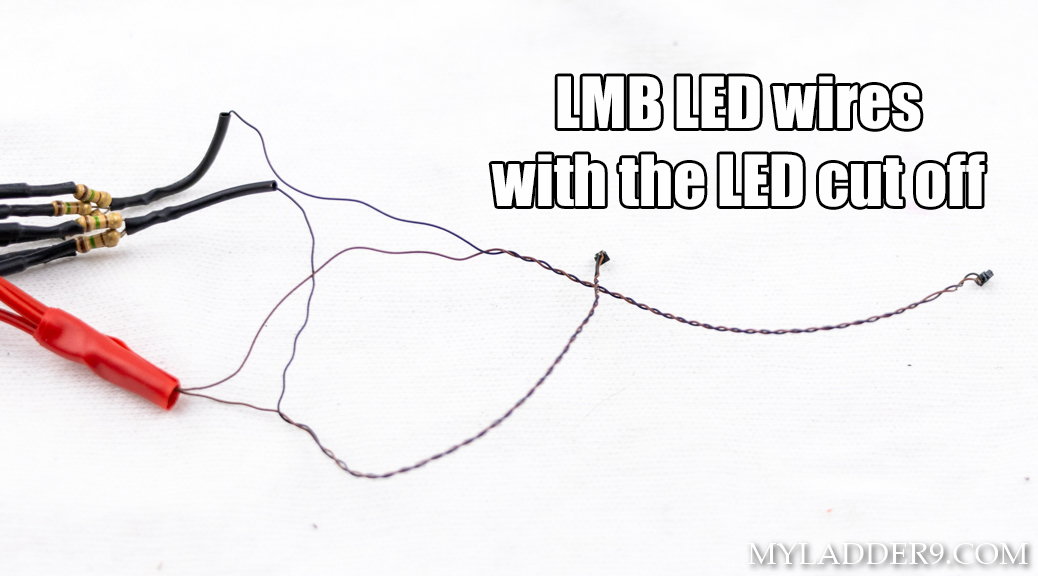 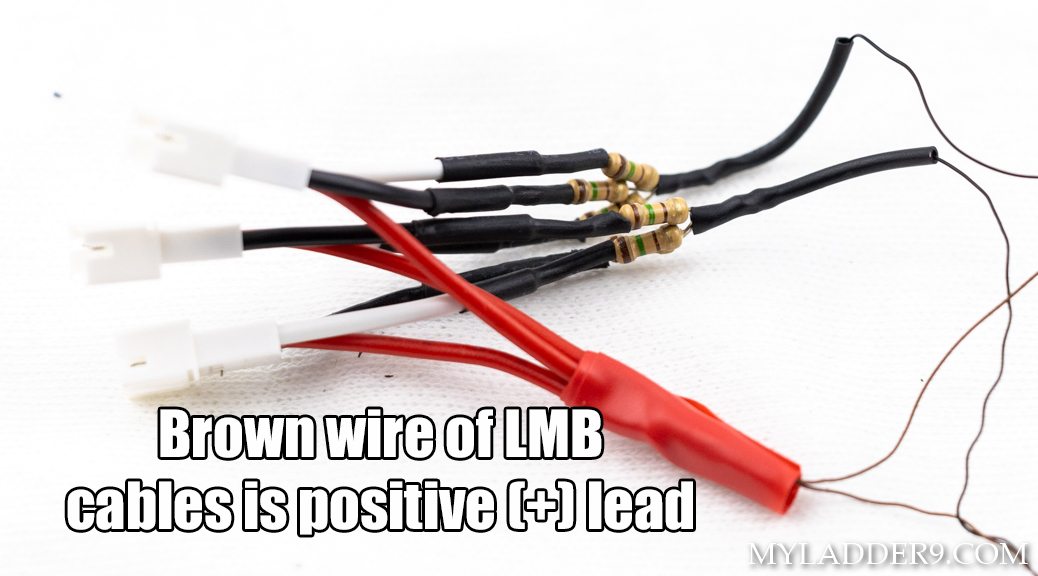 I could then reinstall everything back into the model, connect these two LMB Cable plugs to an LMB Effects Board set to fast strobe, and we are done. Wiring it the way I did allowed me to have one center white LED on and the farthest two red LEDs on at once, alternating back and forth. Feel free to wire your own Lightbar lights to have any pattern you like!

The local connections for these LEDs are as follows: 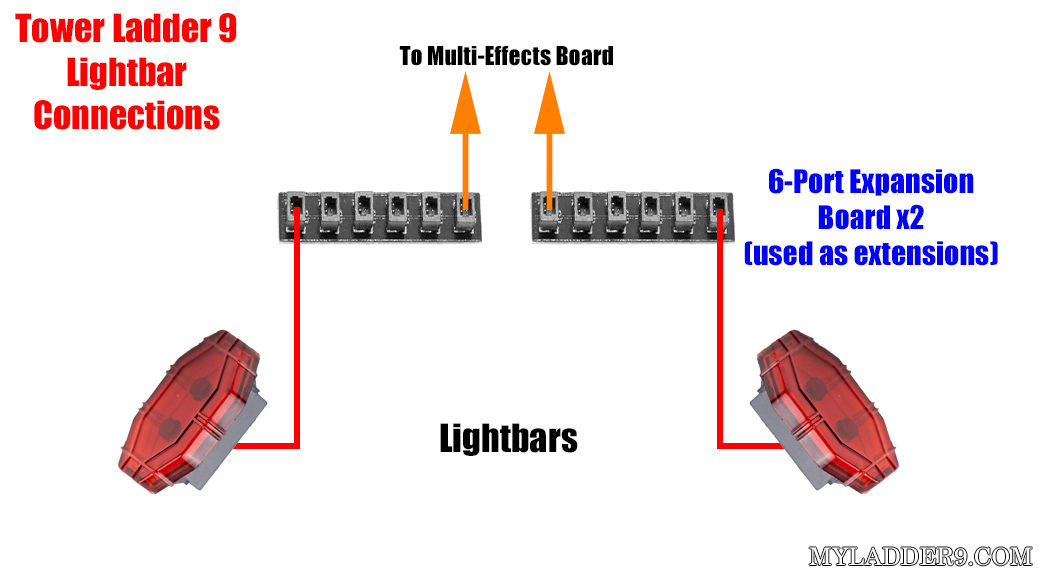 If we consider my full plan diagram, we can test the lighting after this stage by connect everything like this: 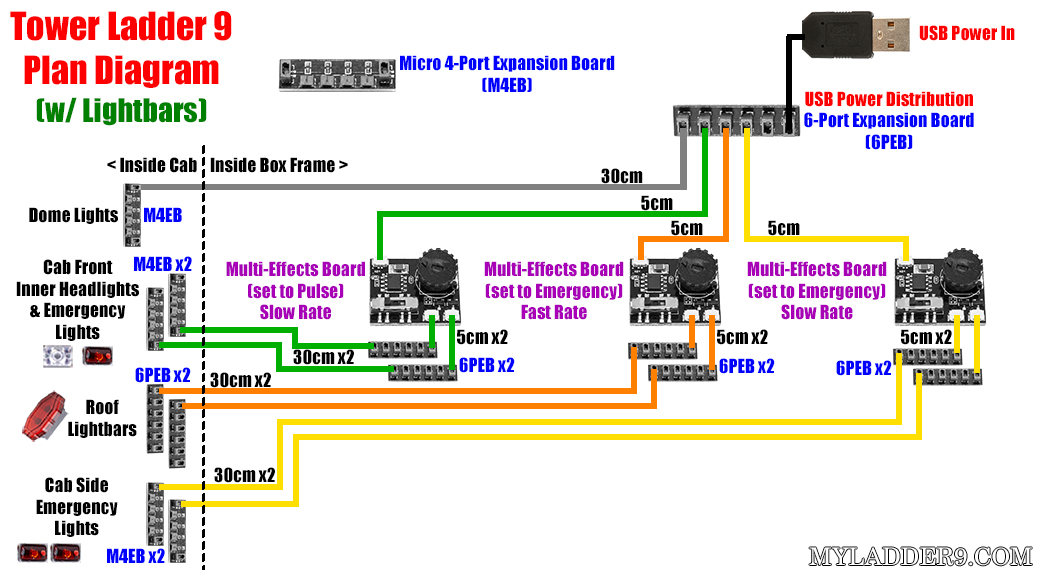 Just for fun, I put all of the lights I have installed so far and shot a quick video. These new LEDs are so much brighter than the stock ones!